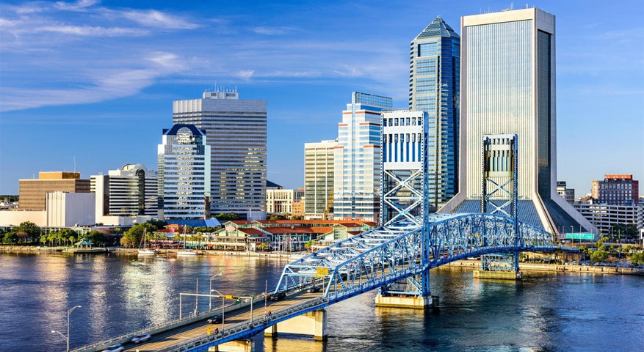 Jacksonville is Florida’s natural water paradise. The abundant canals, parks and nature reserves provide opportunities to escape the ordinary and relax in nature’s amusement park. Jacksonville has the largest urban park system in the country at over 80,000 hectares, as well as over 20 miles of pristine white-sand beaches. Travel from Miami to Jacksonville and find amazing hidden gems from Florida.

All this natural beauty is surrounded by a modern and vibrant city, the largest in the country, filled with authentic dining options, exciting attractions, world-class museums, beautiful hotels, exciting events, good nightlife, modern downtown and neighborhoods.

Jacksonville grew out of the St. John River, Florida’s longest river. Until the middle of the 16th century, the region was inhabited by the Timucua people. In 1564 a French colony called Fort Caroline was set up, one of the first European settlements in the United States.

At the beginning of the 19th century the region, which until then belonged to Spain, was taken over by the United States. The name Jacksonville was named after Florida’s first governor, Andrew Jackson, who later became president.

In 1901 the city suffered a terrible fire, which destroyed more than 140 blocks and left around 10,000 people homeless. It is considered the third-largest fire in the US.

Jacksonville served as the home of more than 30 film studios in the early 20th century, but the golden age did not last long. For a variety of reasons, political and behavioral, the studios ended up abandoning Jacksonville and moving to Hollywood, which became the heart of world cinema.

From beautiful beaches to the thrilling Intracoastal Waterway and the glittering St. Johns River, water defines this “waterfront town by the sea.” Get tanned, take surf or kiteboard lessons, rent kayaks and paddleboats, fish from the pier, or join a fishing excursion. Stay at oceanfront resorts and wake up each morning to an incredible sunrise over the Atlantic Ocean.

Less than 3 miles from the beaches, you’ll find the Intracoastal Waterway, 24 miles from peaceful canals and natural coves where visitors can take an airboat ride and see local wildlife including dolphins, manatees and hundreds of species of fish.

In the heart of downtown, the St. Johns River is another attraction: enjoy a river cruise with brunch, walk the 3 miles of RiverWalk and visit the Riverside Arts Market, all while enjoying breathtaking views of the river and the city skyline. Traveling from Miami to Jacksonville is worth every second.

Green is the color of Jacksonville

Thanks to the park’s extensive system, green is the color of Jacksonville and adventure is your game. Just minutes from downtown, the city’s wild side flourishes at the Timucuan Ecological and Historic Preserve. This 18,615-acre reserve is made for those looking for a natural thrill.

Swim, boat, fish and enjoy historic sites such as Fort Caroline National Memorial, often called Florida’s “Atlantis” and Kingsley Plantation with its former slave quarters, barn, plantation and kitchen, and garden that is now part of an ecological reserve.

Explore the Jacksonville Zoo and Gardens, with more than 3,000 species of rare and exotic animals and plants. Venture to the Catty Shack Ranch Wildlife Sanctuary and feed lions, tigers and other big cats. You can also mix romance and adventure while horseback riding on white sandy beaches with Kelly Seahorse Ranch on Amelia Island. These are great places to visit if you are traveling from Miami to Jacksonville.

Jacksonville is one of the country’s top arts destinations

One of the last remaining dinner theaters in the country, The Alhambra, still functions alongside one of the oldest functioning community theaters, Theater Jacksonville. The Jacksonville Jazz Festival brings an impressive array of artists and more than 130,000 jazz lovers to downtown Jacksonville each Memorial Day weekend. Year-round, January through December, there’s something exciting to do and explore in Jacksonville.

With Mundi’s luxury car service, you can explore beloved tourist attractions, iconic sites, and breathtaking scenery from the comfort of a chauffeur-driven luxury car, which allows you to savor each mile in privacy with your choice of amenities.

Discover each destination with an expert chauffeur – a personal driver, tour guide, and mobile concierge, all in one – revealing to you each city’s rich history, magnificent beauty, and unique culture.