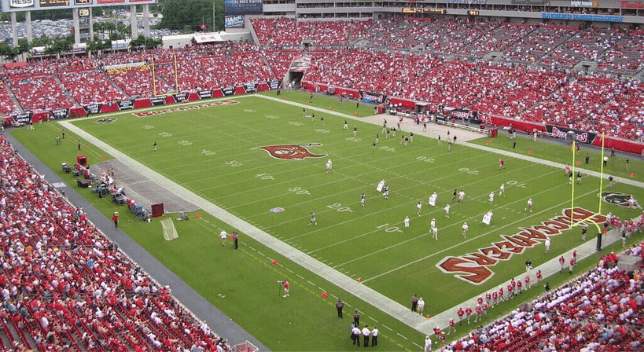 The Super Bowl 2021 has everything to be a memorable moment, even in the midst of the pandemic. It will be the 55th edition of the Super Bowl and the 51st for the NFL.

The event will be held in Tampa, Florida, home to the Tampa Bay Buccaneers and where the great Raymond James Stadium is located.

The venue was launched as Tampa Community Stadium, with a capacity for 65,000 people.

The stadium opened in 1998, for the game between the Buccaneers and Chicago Bears.

Due to a naming rights contract, the stadium changed its name to Raymond James Stadium, linked to the financial company Raymond James Financial.

Since it was created, the stadium has hosted four Super Bowls. The last game played there was in 2009. This will be the fifth Super Bowl held in Tampa.

Renovations in the Stadium

The venue has an unusual shape, like a pirate ship with cannons, which refers to the home team’s name, the Buccaneers. When Tampa Bay fights and scores, the ship’s cannons fire, and talking dolls stir the crowd.

Its pirate theme is the symbol of the city that is also proud of the stadium’s format and the team that represents it, the Tampa Bay Buccaneers.

The stadium has recently been revitalized with renovations to receive people safely, respecting health professionals’ standards.

According to NFL commissioner Roger Goodell, capacity will be reduced due to the pandemic, but facilities will not disappoint the public while visiting the premises.

Until then, it is believed that the world will be safer, and perhaps the pandemic will be more controlled with the vaccine’s arrival.

Although the stadium’s capacity is up to 65 thousand people, it is estimated that the paying public in the Super Bowl 2021 will be only approximately 15 thousand due to the pandemic.

Tampa Bay Buccaneers has been part of the NFL league since 1976.

The club belongs to the family of businessman Malcolm Irving Glazer, who, in addition to investing in the Tampa Bay team, also owns the English soccer team Manchester United.

This year is special for the Tampa Bay Buccaneers team, as the Super Bowl final will be at home. The excitement is great, but there are still many duels ahead, and the playoff is not yet defined.

The decision date is already set. It will be on the first Sunday of February 2021, on the 7th. The expectation also revolves around quarterback Tom Brady, who recently left the Patriots for the Buccaneers, in a personal decision after a long consolidated career in the Boston’s team.

However, Brady is the biggest American football star today, much admired and loved by the public. His plays are a spectacle apart.

As the name implies, the city is formed by a bay on the West Coast of Florida, within Hillsborough County.

It’s called Tampa due to the river that forms the bay, Old Tampa, which joins its waters with Hillsborough Bay, forming Tampa Bay.

“Tampa” was the name given to the region by the first explorers who colonized the region.

On betting sites, the favorite team is the champion, Kansas City Chiefs, who presented the season’s best campaign. The quarterback Patrick Mahomes is one of the field’s talents that has defended the title for his team.

At the American Conference, Kansas City’s main competitors are Buffalo Bills and Pittsburgh Steelers. In the National Conference, the favorite is the Green Bay Packers.

This year, Canadian singer The Weeknd will lead the show. In 2020, the stage was occupied by Shakira and Jennifer Lopez, with 104 million viewers watching.

Halftime is sponsored by Pepsi and is called Pepsi Halftime Stage. It is the ideal space for artists to fully exploit their performances with all the creativity possible.

In an interview with The Variety, the singer said he was thrilled with the choice, as he is fulfilling a childhood dream of being on stage in the same way as Madonna, Michael Jackson, and Lady Gaga have been.

Where to watch Super Bowl 55

The Super Bowl will be broadcast exclusively on the ESPN channel, which is the official NFL broadcaster. Anyone who wants to watch directly over the internet can access WatchESPN.

Most viewers should watch the game at home due to the pandemic. But it is still possible that some bars and restaurants reserve their TVs to transmit the signal to customers.

The food and service sector takes advantage of the event’s success to sell their products because, at the time of the game, it is traditional to serve all kinds of snacks and drinks either directly to the public or by delivery to residences or events.

How to get there

To get to Raymond James Stadium, it is good to plan to go by car and take your route in advance, depending on where you are staying.

You can book Mundi’s luxury car service to get to your hotel and the stadium. Our chauffeurs are used to taking our VIP clients to Super Bowls every year. They will make sure you have an amazing experience.

There is a good variety of hotels close to the stadium, for the comfort of those going exclusively to watch the match.

There are many luxury hotels around, and February is a great time to receive guests. Florida is a warm region, bathed in sunshine all year long, and Tampa is a great place to visit in the end of winter.

There is also a good variety of bars and restaurants in the region, working hard to serve tourists and fans who will stay in the city on match day.

Look for a good itinerary of bars that offer your choice menu and drinks to enjoy with friends or family.