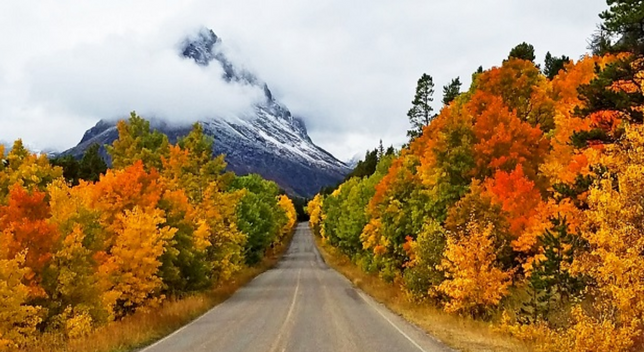 Red, yellow and orange leaves bring color to autumn in the US. New England attracts lovers of autumn colors to its colonial towns and sunny roads. In the Southeast, trails in the Blue Ridge Mountains lead through colorful forests inhabited by wildlife. Mountain highways pass through beech groves in the Southwest, while soaring peaks and even higher skies set the scene for the forests of California’s Eastern Sierras. Here are five amazing places to visit in the fall and enjoy every color.

The Apalachian Trail connects eight cabins for lodging in the White Mountains, which are set amidst the trees with yellow, gold, orange and red canopies that embellish the place’s background. The Conway Scenic Railroad guarantees the movement perceived in this great kaleidoscope of North Conway, a hospitable city located 145 miles north of Boston.

From North Conway, travelers gain access to the mountains on the Kancamagus Highway and have the chance to enjoy one of the many views provided by the highway. Don’t miss the view from the Omni Mount Washington Resort’s balcony, which hosted the post-World War II Bretton Woods economic conference. The great Mount Washington is phenomenally beautiful and one of the top places to visit in the fall.

The route is full of scenic views, picnic areas, campgrounds and lodges. The peak of Sharp Top, in the Peaks of Otter, offers beautiful views of Virginia’s mountain foliage. In North Carolina, you can enjoy the three-tiered Linville Gorge waterfall and venture across the Grandfather Mountain Bridge.

The sun illuminates the Sangre de Cristo Mountains in northern New Mexico. From the Enchanted Circle Byway you can witness the impressive mix of red oaks, yellow willows and green pines interspersed with the golden leaves of the beech trees.

The city of Taos is a magnet for artists and adventurers. From Taos, the route runs parallel to the Río Grande del Norte National Monument and its graceful suspension bridge. There are many mountain trails in the area, great for hiking and biking. Back in Taos, take a detour to Pilar and New Mexico Highway 570 to pass the yellow willows along the Río Grande.

Mother nature’s raw beauty is the main attraction of the Eastern Sierras, where blue lakes, ice canyons, peaks and geological formations are worth a closer look. The Sierra Nevada Mountains cover more than 300 km and are golden and yellow in color with willows and beeches.

The Eastern Sierra Scenic Byway runs side-by-side to the eastern base of the Sierras on United States Highway 395, east of Yosemite National Park. For updates on foliage, visit California Fall Colors.

Occupying Montana’s remote northern region, Glacier National Park invites silence and tranquility between mid-October and mid-November. Its trails are deserted and the crowds are far from the campsites and available accommodations.

Look for the yellowed beeches in the snowy scenery. Green pines are the biggest attraction of autumn. As the season draws to a close, orange colors begin to dominate. Wildlife is present throughout the park and is guarded by the Going-to-the-Sun Road, which closes mid/late October. This is another  must-visit destination in the fall.

Did you enjoy our article? How about traveling in comfort and style with Mundi?