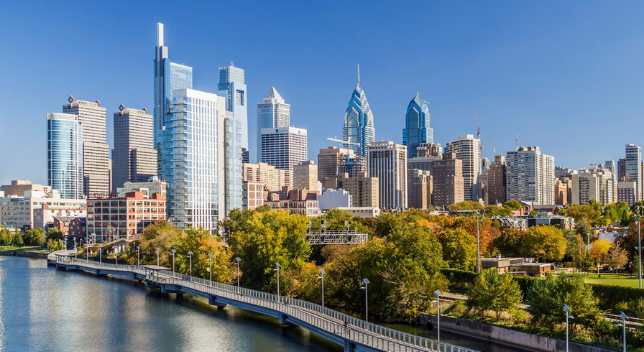 Traveling from New York to Philadelphia is a very interesting tour to include on the itinerary for anyone who has a free day or wants to enjoy the trip in a different way.

The nearby city of the Big Apple is full of historical and cultural activities, has excellent dining options and many must-see attractions.

In this post, you have all the information about Philadelphia and how to make a return trip from New York.

Where is the city of Philadelphia

Located in the state of Pennsylvania, Philadelphia has more than 1.5 million people and is one of the most populous cities in the US.

When compared to New York, Philly feels like a country town. It can get busy in the center, but in the neighborhoods what prevails is the tranquility and peace.

Considered the cradle of US Independence, led by Benjamin Franklin, the city is full of monuments, museums and representative places of American history.

Born in Boston, Benjamin Franklin was the most distinguished resident of the city with fair tributes in every corner, including Philly where he spent the last days of his life.

This is just a hint of history among many others that Philadelphia reserves during a visit. A unique cultural immersion that is well worth adding to the itinerary.

Distance between New York and Philadelphia

The distance between New York and Philadelphia is about 90 miles.

The journey by bus or car takes approximately 2 hours, in other words, they are neighboring cities and are easily accessible for a trip.

New York to Philadelphia by car

Renting a car service from New York to Philadelphia is a good investment for those looking for comfort on a family trip or with a group of friends.

With a car it is possible to make a hit and come back with ease, without having to worry about the return time of the bus or train. With Mundi’s luxury car service, you can have a chauffeur at your disposal to drive you anywhere and at anytime.

What to do Philadelphia

The city of Philadelphia is one of the most important in US history, along with Boston and Washington DC.

It was in Philly where the Declaration of Independence was signed, the American Constitution was created, among other very important facts in the country’s history.

The 1-day itinerary in Philadelphia on its own is a bit busy, but well planned, it is possible to enjoy the main tourist attractions.

To enjoy more things to do in Philadelphia, we recommend arriving early in the city, around 9 am and returning at the end of the day.

Things to do in Philadelphia in 1 day: