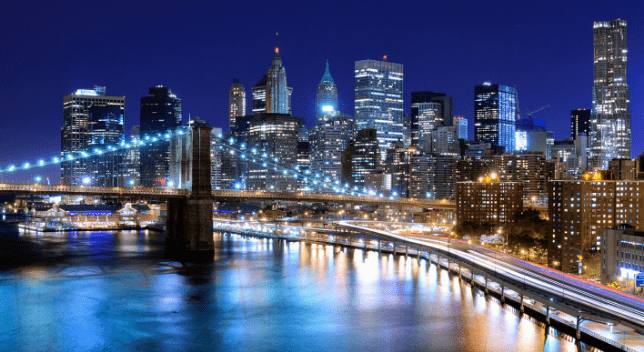 New York is the American dream capital. It is one of the leading business cities worldwide. In NYC, you will find several tourist attractions and trendy artistic shows. A luxury trip to New York is mandatory at some point in your life!

The main attractions in New York are Broadway, Central Park, and the Statue of Liberty, restaurants of the most famous chefs, several entertainment options, as well as several corporate interests of big companies from all over the world.

It is worth visiting New York and indulging in all the luxury entertainment that the city can offer!

Yes, it is possible to get to know the whole beautiful region of New York by going on a helicopter tour. Several companies offer this service. There are even varied itineraries depending on the tourist’s preference or even a more traditional flight passing through all the city’s main points and surroundings. This is the highlight of a luxury trip to New York.

Manhattan, seen from above, is beautiful, has an incredible natural landscape, emulated by the main sights possible to see. The Statue of Liberty is in evidence, and it is impossible not to want to take pictures from incredible angles.

The helicopter ride does not take long, around 10 to 12 minutes, but it is enough to experience and keep in mind a wealth of sensations when faced with an image as imposing as that of New York City.

And remember that you can increase this tour by hiring a limousine service to take you to and from the helicopter charter center! Then your luxury experience will be complete.

Central Park is on the island of Manhattan and is one of the places with the largest natural open area on the planet.

It is one of New Yorkers’ preferred spaces to get in touch with nature, in the middle of a busy city.

It is possible to rent a bicycle, have a picnic, or just give crumbs to the ducks that inhabit the lakes in the park.

If your luxury trip to New York is during winter, you can check the frozen lakes, and it is possible to practice ice skating during the Christmas season.

It is a great place to sunbathe amidst nature during the summer, even though buildings around surround the area.

You can also find other attractions around Central Park, such as the American Museum of Natural History. The place is known for exhibiting dinosaur fossils, including a fully assembled 15-meter-high Tyrannosaurus Rex.

Next to Central Park is also the Upper East Side residential district, where the New York elite lives.

The upscale neighborhood became known in the Gossip Girl series for portraying the lives of the wealthiest.
Chinatown

Also in Manhattan, Chinatown is the Chinese immigrant neighborhood within New York. They arrived there in the 19th century and continued to populate the region and keep it economically active.

It is an excellent place to sample typical food and buy oriental products.

In Columbus Park, it is possible to practice Tai-chi Chuan in the morning as the neighborhood inhabitants do.

The imposing symbol of New York is one of the most traditional attractions in the city. The Statue of Liberty is found on an island south of Manhattan, and to reach it you have to cross New York Bay by ferry.

The tour to go through the entire statue takes approximately 4 hours.

The Empire State Building is located in Midtown, right in the center of Manhattan. It has 102 floors, 1,450 feet high, including the antennae.

At the top, there is an observatory where visitors can enjoy the whole of New York City to the edge of the county.

Its decoration has been a beautiful example of art deco since its construction in 1931. It’s another must-do to your luxury trip to New York.

There are 5 shopping centers that you can’t miss in the city:

– Macy’s: the building is part of the traditional New York postcard. There are 7 floors of the department store dedicated to all kinds of products, including clothes, cosmetics, shoes and everything about luxury items

– SoHo: The South of Houston is a conglomerate of streets in Manhattan filled with fashion stores. Here are Victoria’s Secret, Nike, Adidas, among others.

– Times Square: One of the most frequented places in New York, where thousands of people pass at the same time. Here you will find Nasdaq, one of the main stock exchanges in the world, MAC Cosméticos, and H&H, in addition to Forever 21.

– 5th Avenue: On this famous avenue is the Rockefeller Center, which houses some of the most popular stores. You will find several types of branded stores of numerous types of products along the avenue, mainly technological ones. Among them, Nintendo, Lego, and Apple stores are some of the ones that most attract attention.

– Atlantic Center: located in Brooklin, which has been revitalized and has attracted attention to establishing brand stores in the region. The Atlantic Center has 5 floors of shopping and a good gastronomic variety with several options and restaurants.

Famous around the world, Broadway is an avenue that connects the Bronx to Manhattan. There are some of the most famous plays in the world, with lasting performances.

Broadway is synonymous with success in the artistic world and is therefore aimed at as a great school for new artists and a consecration for veterans. Being on Boadway is like being successful. Countless pieces became famous there and are still known today. Cats, The Phantom of the Opera, Hair, are some examples.

Mundi Limos drives you in New York in a luxury car

Don’t worry about anything while in New York. Mundi Limos takes you through New York traffic. We have the best luxury cars and chauffeurs to serve you and make you feel comfortable, with air conditioning and all the convenience we can offer.

Rest assured about the trip’s safety, as the chauffeur will be equipped with GPS and you will be able to track and locate the way you want or discover addresses if you need to. We have more convenience in different types of vehicles and access to wi-fi and cell phone charger if you need it.

Talk to our agents on the website. Our online chat is available 24 hours a day. Get all the answers you need. Mundi Limos is here to help you.