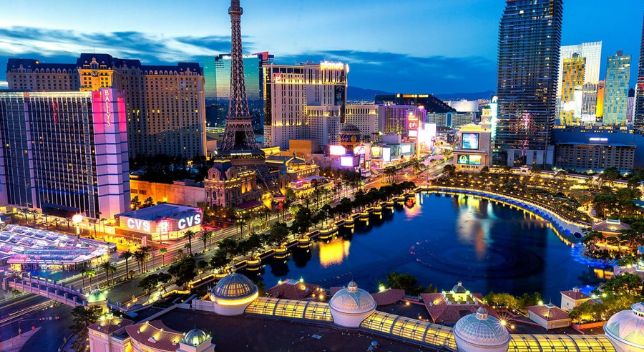 In this post, we invite you to discover the best hotels in Las Vegas with themed casinos. If you still don’t know where to stay in Las Vegas, keep reading.

The casino hotels along the famous Las Vegas Strip are the postcard of the world capital of entertainment.

In addition to stunning places, they offer a multitude of attractions, shows and concerts.

Inspired by the Italian city of Bellagio, this hotel-casino stands out for some eccentricities. One of them is the dancing water show at the Bellagio Fountains, a must-do in Las Vegas. Presentations are daily and free, every 15 or 30 minutes, depending on the time of year and day of the week.

One of the most instagrammable places in the city is the Bellagio Conservatory & Botanical Gardens. The reason? The splendor of the garden. There are almost 14,000 ft² with live sculptures and a variety of flowers renewed every season.

The chocolate fountain at Jean-Philippe Patisserie inside the Bellagio, considered the largest in the world, is also a hit with hotel visitors.

The show “O”, by Cirque du Soleil, considered one of the best ever produced by the company, is presented at the Bellagio Theater. On stage, the artists perform aerial acrobatics over an immense water tank.

Rooms overlooking the Bellagio Fountains are one of the highlights for guests. In all, there are 512 suites and the capacity to receive around 4,000 people. It’s one of the best options if you are not sure where to stay in Las Vegas.

It boasts a cinematic environment with architecture that reproduces the Greco-Roman style. For this reason,the Caesars Palace is one of the hotels that most served as a backdrop for Hollywood movies. The most popular is The Hangover.

In addition to the luxurious atmosphere, what makes Caesars Palace even more popular are the attractions at The Colosseum:

Celine Dion: Classic Las Vegas Show. It was considered, by the American press, the best since Elvis.

Omnia nightclub is another big attraction. With almost 76,000 ft², the space has a lounge, main floor and a terrace with a panoramic view of Vegas. DJs like Calvin Harris are in charge of the music.

Replicas of Greek statues are everywhere, from the casino to the swimming pools, which also boast Greek columns.

Those who choose to stay at the hotel, there are 4,000 suites distributed in 6 towers.

As the name reveals, it reproduces the iconic landscape of New York City. Its 12 apartment towers resemble famous New York buildings, including the Empire State and the Chrysler Building.

Two other replicas make tourists feel like they’re in the Big Apple: the Statue of Liberty, which is 147 feet high, and the Brooklyn Bridge.

New York’s iconic yellow cabs are on the tracks of The Big Apple Coaster. At 200 feet high, the roller coaster reaches 66 mph and has a drop of almost 112 feet.

The New York New York is a great option for those visiting any of the attractions at the T-Mobile Arena.

The multi-event venue is a 12-minute walk from the hotel and includes in its schedule: NBA Games, NHL Games (National Hockey League), UFC fights and concerts in general. If you are going to one of these sports events and don’t know where to stay in Las Vegas, this is a great option.

The New York New York is also across from the MGM Grand Hotel-Casino, one of the best known in Vegas when it comes to entertainment.

Where to stay in Las Vegas for a romantic trip? Get ready to be transported to the city of light and love. This hotel-casino accurately reproduces the architecture and cabaret style of the French capital. For example, it recreated elements of the Paris Opera House and the Louvre.

Its main highlight is the replica of the Eiffel Tower – there is also a reproduction of the Arc de Triomphe. Just like the original monument, you can buy a ticket to climb to the tower’s top, where you have a 360-degree panoramic view.

Tip: The Eiffel Tower is a good place to watch the dancing waters show at the Bellagio Fountains.

The hotel also offers a varied program of shows.

Inspired by Hollywood and its stars, Planet conveys a bit of the Los Angeles atmosphere.

Planet Hollywood has three theaters for illusionism presentations and performances – Murray The Magician, Xavier Mortimer and Santiago Michel – striptease with Crazy Girls and acclaimed artists, among them:

Backstreet Boys: The best-selling boy-band of all time is part of the regular Las Vegas lineup.

It was one of Las Vegas’ first themed hotel-casinos. In its 3,044 rooms and in the outdoor area, it reproduces the atmosphere of the Polynesian islands. At the pool, there are waterfalls and vegetation with exotic plants and flowers.

Nothing could be more reminiscent of the volcanic archipelago than an “active” volcano, which erupts every night. A water and visual effects spectacle that culminates in a “lava” eruption.

This is where Cirque du Soleil presents the show Love. The story of the English group is told from acrobatics and to the rhythm of the band’s classics. It is one of the most popular attractions in Las Vegas.

In the lobby of this casino hotel, an aquarium houses more than a thousand marine species, reproducing Australia’s Great Barrier Reef.

You even forget you’re in Vegas. The canals, filled with gondolas and singing gondoliers, the beautiful frescoes on the lobby ceiling, the Roman columns and statues scattered throughout the casino transport us to Venice. This is another good place to stay if you want to enjoy romance and still don’t know where to stay in Las Vegas.

Here, a gondola ride is also a big attraction. There are 500 thousand visitors every year. In addition to going through internal and external channels, tourists will be able to take a class to learn the trade of gondoliers and visit an exhibition about this Venetian symbol.

Anyone who wants to take a selfie with Bradley Cooper, Beyoncé and Brad Pitt, just go to The Venetian. Madame Tussauds Las Vegas, a branch of one of the best wax museums in the world, is located there.

The Venetian got bigger with the incorporation of The Palazzo hotel, which follows the same Venetian style. The integration made The Venetian the second largest hotel in the world with 7,000 rooms.

Have you already chosen your favorite or which ones you want to visit? Mundi’s limo service in Las Vegas can get you there.