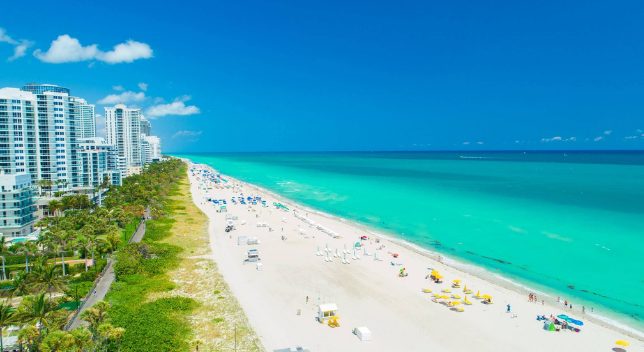 Check out 10 cool places to visit in the South Beach area of ​​Miami, the city’s hottest region. There are beaches, hotels, clubs, bars, boutiques, art galleries and restaurants, as well as many buildings and constructions in the Art Deco style. It is also there that Ocean Drive, one of the main avenues in the city, is located. Discover 10 highlights of South Beach in Miami.

1. Beaches on South Beach in Miami

Some of Miami’s best beaches are on South Beach. Most of them are busy and very crowded, and as you walk along the boardwalk you will find several of them, all full of children and families, young people, couples, some city dwellers, and many tourists. The most famous are bustling Nikki Beach, which has a beach club that has several beachside parties throughout the day and night, and South Beach Park Pointe, which is much quieter and more relaxed.

Collins Avenue is a slightly less crowded part of South Beach. It is also called the Shopping District, because it is an area with only branded stores from around the world (most of them more expensive). Even though it’s a region where you might not go shopping so much, it’s worth visiting. It’s quite beautiful, and a good place to admire the Art Deco architecture of the neighborhood.

Similar to Fifth Avenue in New York, Lincoln Road is a must-see for anyone traveling to South Beach in Miami. It’s not the ideal shopping destination because it tends to have higher prices, but it’s still worth the trip. The seven blocks of the avenue had traffic closed to cars in 2006, making the place an even more attractive and safe shopping and walking center for pedestrians, who can enjoy freely without worrying about cars or motorcycles.

There you can also enjoy restaurants, cafes, art galleries like the famous Romero Britto gallery, independent clothing stores (which can be cheaper!) and even a cinema. There are options from having breakfast to enjoying the night.

Española Way is a kind of Spanish village in South Beach, and there you will find all kinds of shops that refer to this country. The restaurants there have a more intimate atmosphere than in other parts of the district, and are great for sampling the best of Spanish, French or Italian cuisine, and admiring some Mediterranean architecture. Española Way is between 14th and 15th streets in South Beach, and you can visit the street at any time, but the most recommended is at night.

Ocean Drive is the most famous avenue in the city and the main one in South Beach. It is an avenue illuminated by colored lights, which has the main bars and clubs in Miami, as well as the famous tattoo studio Miami Ink Tattoo, hotels, luminous signs and some stores. Spend at least one night there, to eat at one of the sidewalk restaurants and have a personalized drink. You can visit it during the day, which is the emptiest period, or at night – in this case, get to bars and restaurants early, especially if you travel in high season.

South Beach’s nightclubs are among the best in the city. There are clubs for all profiles, and they usually open shortly before midnight – and they are packed, so it’s worth arriving at opening time. Most of the clubs in this area are concentrated between Collins and Washington avenues, between 5th and 6th streets.

This building is a 1920s landmark in South Beach. It is beige, belongs to the Mediterranean Renaissance and is home to a famous cinema in the region. Its red roof can be seen from afar.

8. The Villa by Barton G in South Beach Miami

This is another really cool building in South Beach, which houses a luxury hotel and a restaurant by chef Barton G. The building is from the Mediterranean Renaissance and was once the residence of Gianni Versace.

Miami’s Lummus Park is also located on Ocean Drive, South Beach’s main avenue. It is a part of the avenue where a beautiful park full of trees, coconut trees and lots of green, joins the white sands of Miami Beach. Lummus Park beach is considered one of the best beaches in Miami to spend the day and relax.

The park’s large trees give you a refreshing break and make sure you don’t have to be exposed to the strong Florida sun all the time. Lummus Park is located between the 6th and 14th streets on Ocean Drive.

The South Beach beach lifeguard huts in Miami are iconic and popular places for photography. A hurricane destroyed the old cabins in 1992, and they were rebuilt by various artists who made them very beautiful, colorful and interesting. The coolest ones are between the 10th and 16th streets.

Did you like our tips about South Beach? Don’t forget that Mundi’s luxury car service can drive you around with comfort and safety.