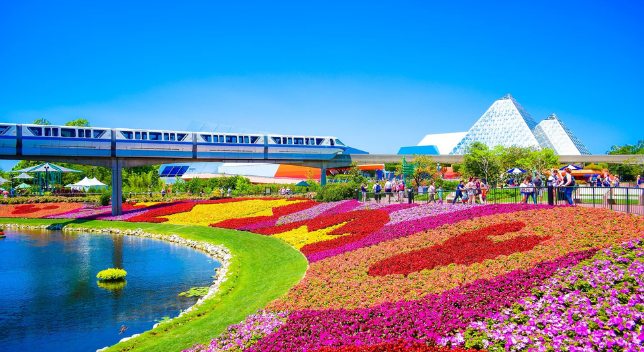 September can easily be considered one of the best months to visit Orlando. Parks tend to get a little more empty, which is great as they are pretty full year-round! Thinking of helping with your trip planning, we made a post talking about Orlando in September and everything you will find in the city!

In addition, several events take place in the city in September and the weather is still very good, as summer is still there. Emptier parks, special events happening and a pleasant climate are everything tourists want most, especially if it’s in Orlando.

In this guide, we’ll tell you more about Orlando in September, its main attractions, how the parks are, the weather, transportation, important tips and guidelines for your trip.

Speaking of Orlando in September

We’ve already told you above: summer continues and the weather is very similar to August.

What really changes is the volume of tourists hanging around in the city and especially in the parks. Obviously don’t expect to find Disney parks, Universal, and many other tourist attractions in the city completely empty, unfortunately, it’s been a long time since we’ve found quiet parks.

This definitely doesn’t happen in Orlando. But when compared to the school holidays, for example, which usually take place from the end of June to the beginning of August, the movement is much smaller.

It’s also good to take advantage of the prices when shopping, considering a smaller amount of tourists, many stores and outlets end up offering several promotions so as not to lose sales.

What to do in Orlando in September?

It’s impossible not to be a little repetitive when we talk about Orlando. The city truly enchants with all the splendor of its landscapes, the contagious energy of its parks and its usual receptivity to everyone who visits it.

In September, obviously, it wouldn’t be much different from that. Also, this month, in particular, can be even better than the others, as there is also a lot of sport, music, culture, concerts and many other attractions.

Check out some of these events in September below:

Shopping in Orlando in September

Many tourists who travel to Orlando, go in the purest expectation of doing good shopping.

First because, at the beginning of the month, we have the Labor Day holiday and most stores in malls and outlets take the opportunity to launch various promotions and unmissable offers, to take advantage of demand.

Second, because, considering that September is a relatively calmer month, in terms of the number of tourists, most shopkeepers do not want to lose sales at all and also use the discount “tool” to attract more customers.

The third reason is related to fashion and the season of the year. It’s just that these same shopkeepers want to quickly spawn their summer stocks, already preparing for the coming autumn-winter. The climate change only takes place towards the end of October, but nobody wants to leave it until the last minute.

In conclusion, it is possible to say that shopping in Orlando in September is indeed a great option.

As already mentioned, in September there is a simple reduction in the number of tourists in Orlando, but nothing that will interfere with the strength of the city, which is precisely tourism.

So, if we have to comment on Orlando’s parks in the month of September, we would risk saying only that they may be “a little emptier” than usual, nothing more.

And so to speak, relatively empty is the great opportunity to enjoy all its attractions and return to them as often as you want, after all, there will be no queues or, at the very least, they will be much smaller.

With the good weather, nothing better than enjoying the water parks in Orlando. It’s a chance to cool off and have a lot of fun.

It is no longer a vacation and, as a result, the city can, as has been said several times, count on a smaller number of visitors. But the attractions continue at full steam, especially with regard to shows, sports, Disney festivals, events, lots of music and culture.

Check out the main events:

Orlando City Soccer Games by MLS: It is the official soccer team of the city of Orlando. Orlando City plays for the MLS – Major League Soccer league, which is one of the main football leagues in the United States, also involving Canada.

Disney Food & Wine Festival: With your ticket to Disney’s Epcot, you can now participate in this event. During the Food & Wine Festival, the park hosts several stalls with typical foods and drinks from different countries. In addition, you will also be able to enjoy many shows and other attractions.

The beginning of Disney’s Halloween: in September? In fact, it starts at Disney parks in August, even though the official date for Halloween is October.

Halloween is a celebration present in many countries. It is originally celebrated on October 31, the eve of the Western Christian feast of All Saints’ Day.

At Disney, celebrations begin in August. But that’s not bad at all, is it? More fun for tourists. It’s a must-see too. But be aware that to participate in the Magic Kingdom Halloween event you need a special ticket for the event, otherwise you will have to leave the park earlier on the days of the event!

Universal’s Halloween: Just like the Disney park, Universal also has its Halloween that takes place on selected days and to participate in the event you also need a special ticket!

Shows in Orlando and region: almost all successful bands and singers, national and international and on their respective tours, who visit America do not leave the city of Orlando out of their calendar and this would be no different in September.

So, are you thinking about traveling to Orlando in September? Mundi’s luxury car service can take you there and drive you around!