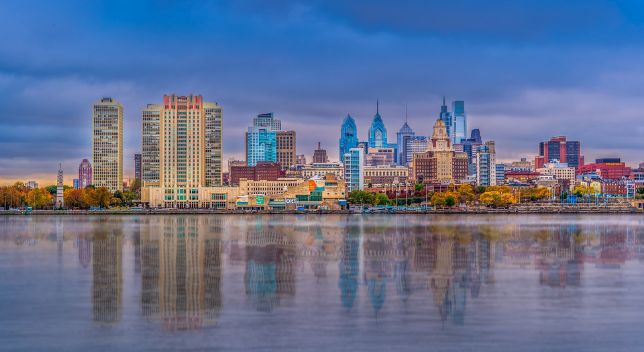 Taking a trip from New York to Philadelphia is a very interesting tour to put on the itinerary for anyone who has a free day or wants to enjoy the trip in a different way.

The nearby city of the Big Apple is full of historical and cultural activities, has excellent dining options and many must-see attractions.

In this post, you have all the information about Philadelphia and how to make a round trip from New York.

Where is the city of Philadelphia

Located in the state of Pennsylvania, Philadelphia has more than 1.5 million people and is one of the most populous cities in the country.

When compared to New York, Philly feels like a country town. The movement is even big in the center, but in the neighborhoods what prevails is the tranquility and peace.

Considered the cradle of US Independence, led by Benjamin Franklin, the city is full of monuments, museums and places representative of American history.

Born in Boston, Benjamin Franklin was the most distinguished resident of the city with fair tributes in every corner, including Philly where he spent the last days of his life.

This is just a hint of history among many others that Philadelphia reserves during a visit. A unique cultural immersion that is well worth adding to the itinerary.

Distance between New York and Philadelphia

The distance between New York and Philadelphia is about 90 miles.

The journey by car takes approximately 2 hours, in other words, they are neighboring cities and are easily accessible for a trip.

New York to Philadelphia by car

Booking a car service from New York to Philadelphia is a good investment for those looking for comfort on a family trip or with a group of friends.

With a car it is possible to travel with ease, having a chauffeur to drive you, without having to worry about the return time of the bus or train.

What To Do Philadelphia | Itinerary 1 day

The city of Philadelphia is one of the most important in US history, along with Boston and Washington DC.

It was in Philly where the Declaration of Independence was signed, the American Constitution was created, among other very important facts in the country’s history.

The 1-day itinerary in Philadelphia on its own is a bit busy, but well planned, it is possible to enjoy the main tourist attractions.

To enjoy more things to do in Philadelphia, I recommend arriving early in the city, around 9 am and returning at the end of the day.

Things to do in Philadelphia in 1 day:

Visited by more than 4 million people every year, Independence Hall is where the history of US independence was signed in 1776.

In the same place, in 1787, the first American Constitution was signed, a set of laws that govern the country, which is valid until today, only minor adaptations.

The beautiful complex has several attractions such as the Liberty Bell (freedom bell), Congress Hall, National Constitution Center, Benjamin Franklin Museum and Independence Visitor Center, all with free admission for visitors to learn more about the history.

Cast in copper, the Liberty Bell is the greatest symbol of the American Revolution, US Independence and also the abolitionist movement.

Its most important appearance was on July 8, 1776, when it sounded to call everyone to read the Declaration of Independence, the American’s greatest pride.

The curiosity is that the famous crack in the bell happened many years before, in 1753, when it was hung in a public square and, at its first clapper, it cracked to the surprise of everyone present.

Today, the Liberty Bell is displayed in the Liberty Hall protected by tight security. All visitors must go through metal detectors and have their backpacks searched to see the greatest symbol of US independence.

In the small house of Mrs. Elizabeth Griscom Ross, better known as Betsy Ross, is where the first flag of the United States, after its independence, was sewn.

It was Betsy Ross who convinced General George Washington, the first US president, to create the flag with 13 stripes and 13 stars, to represent the thirteen colonies.

Considered the first official street in Philadelphia, Elfreth’s Alley was founded in 1702.

Visiting the oldest street in Philadelphia takes you back to the 18th century and still yields beautiful photos.

The work is very small, much smaller than the one in New York, but it has all the symbolism of being the first and most visited sculpture by the American artist.

There’s usually a queue for photos, but no biggie. Just wait a while to register.

The beautiful complex where Philadelphia City Hall is located is considered the largest public space in the entire United States.

Highlight for the statue of William Penn at the top of the tower, homage to the founder of the province of Pennsylvania, seen from almost every corner of the city.

The curiosity is that since its foundation, in 1901, the 167-meter building had a “gentlemen’s agreement” that prevented the construction of any other taller building.

This agreement was only broken in 1987 with the construction of One Liberty Place, considered the second tallest building in Philadelphia at 288 meters high.

The most interesting thing is that there is an observatory on top of the city hall building. The attraction is called the City Hall Tower Tour and allows you to have the same view as the William Penn statue.

If you like art and culture, you need to visit The Rodin Museum.

The museum has the largest collection of French sculptor Auguste Rodin outside France.

Opened in 1929, The Rodin Museum was recently renovated and its collection includes important works such as Bacchus in the Vat, Burghers of Calais, The Gates of Hell, among others by Rodin, considered one of the greatest artists of all time.

Known as The Art Museum, the Philadelphia Museum of Art was well known for its staircases that served as the backdrop for the Rocky – A Fighter films.

But the building goes far beyond the stairs. Considered one of the most important museums in the USA, its collection includes very rare works by renowned artists.

Be sure to visit The Art Museum when in Philadelphia.

The importance of Philadelphia for the history of the United States is undeniable, but many people visit the city to take another tourist circuit, more precisely the one in the movie Rocky Balboa.

Played by Sylvester Stallone, the saga of a Philadelphia-born boxer, title-winner with thrilling fights, made movie theater history and has fans worldwide.

In the movies, Rocky has always praised the city of Philadelphia, including training before his fights. It was there that several Philly sights were introduced to many people who still visit the city today because of the movies.

Today, the jail has become a large museum with several stories about the events that took place in its corridors and cells. A curiosity is that the Eastern State Penitentiary was the first prison with individual cells to house prisoners.

Among the most famous prisoners is Al Capone, arrested in the state and taken to prison for one of his crimes, before being arrested again and taken to Alcatraz.