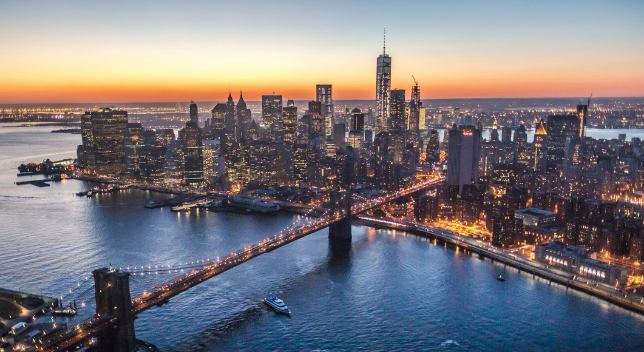 New York is one of the most visited cities in the world and no wonder. The city that never sleeps offers tours and attractions for different tastes, throughout the year. You’ll never run out of things to do in New York City.

The city inspires art in every square foot. Also, when strolling around Manhattan, it’s hard not to walk looking up. The huge buildings and skyscrapers are what attract tourists’ attention the most.

There are so many things to do in New York City that when we arrive, we don’t know where to start. Visiting the city by itself gives us the feeling of being in an open-air cinematographic studio.

Gastronomy is another peculiar point. The restaurant options are numerous, but it is difficult not to give in to fast foods, such as meals made in food trucks, hot dogs and pizza.

From options like some of the best museums in the world, city observation decks, Times Square lights and Broadway animation.

Dearest to tourists, right in the heart of Manhattan is the most famous green area in the world: Central Park. The huge park occupies 51 blocks of New York, between 59th Street and 110th Street.

One of the most amazing places in Manhattan, with many attractions and that feeling of being in a place where several series and movies were recorded.

The park has several attractions worth visiting, such as a skating rink, restaurants and even a zoo. But be aware that you’ll need to book at least two days if you want to explore the attractions. If you don’t have that much time to spare, choose the destinations that you are most curious to see.

In Central Park you can enjoy different attractions, from north to south, such as lakes, fountains, sports courts, small viewpoints, bike tracks, rollerblades, beautiful lawns, a zoo, among others.

The tip is to start the tour from south to north, as the main tourist attractions are located in the southern area. It is also interesting to reserve a few minutes of your itinerary to enjoy each area, sit down, take pictures and enjoy this unique place.

One of the most beautiful and traditional bridges in the US, the best access to Brooklyn Bridge is through the park that bears the same name.

From this park you will have access to the traditional carousel, a beautiful walk and the view of two traditional bridges, Brooklyn and Manhattan Bridge.

The view from this place is amazing, a great place to have a coffee in winter or a lemonade in summer, take beautiful pictures and enjoy the charming region. If you thinking about things to do in New York City this one should definitely be on your list.

The bridge that connects Manhattan to Brooklyn was initially only used by residents who needed to connect one neighborhood to another, but due to its extension and the beauty of its lights, it became one of the most visited points in the city.

This is one of New York’s most visited sights in the world.

It is located on an island and to get there, you need to buy a boat ride from Manhattan. Some tours only pass through it and others allow tourists to go down and discover the space calmly.

The statue region is something incredible to be in and allows for a splendid view of the city of Manhattan.
The statue park is beautiful at different times of the year, each with its own charm. In summer, it’s always very crowded and in winter, it’s a little quieter.

The street of musicals worldwide, is a must-see attraction for anyone looking for things to do in New York City. There are more than 40 theaters and different plays.

To guarantee you’ll get to watch shows, it is recommended to schedule and buy in advance, as tickets are sold out quickly.

One of the main postcards of the world, it is a beautiful and incredible place to walk at night after a day of sightseeing.

Times Square is at the crossroads of famous and busy streets, between 42nd street and 47th street. It is in the heart of Manhattan and is the name of an area that crosses two major avenues of the city, made up of several intersections and corners.

It was and is the scene of some of the most memorable images in American history, such as the photo that shows a sailor and a nurse kissing to celebrate the end of World War II. It houses some of the brightest and most visible ads in the world, it’s impossible not to be enchanted and impressed by them.

Along the street there are several famous stores, such as Disney, M&Ms, famous clothing brands and department stores, in addition to many famous restaurants and bars.

The spot is known for its lights, large billboards, tourist bustle and traffic. On site, all buildings are ‘required’ to install luminous advertising signs.

The place is extremely visited on New Year’s Eve, where thousands of people gather to see the famous Ball Drop and also the most famous shows in the world.

The Vessel is considered one the biggest real estate investments of all time.

It is a complex of incredible buildings. Next to The Vessel is an upscale shopping mall where it’s worth strolling and venturing through the stairs.

Empire State Building and Top of the Rock

New York City has fantastic architecture and giant buildings, where it is possible to have a view of the entire city. The two most famous are the Empire State Building, known for the movie King Kong, and Top of the Rock.

Both are business buildings, but you can buy tickets for visitation and access the terrace in order to see all of New York City, see all the famous buildings, Central Park, the lights and all the excitement of the city.

The Empire State Building has two large observation decks. One on the 86th floor, the most popular and frequented, and another on the 102nd floor.

The Top of the Rock consists of three observatories between floors 67° and 70°. These two should be on your list of top things to do in New York City.

Fifth Avenue is a must for anyone visiting New York. For fashion lovers, this avenue is where the most famous (and expensive) brands in the world, such as Tiffany&Co and Louis Vuitton, are located.

In addition to the shops, it is where the Rockefeller buildings and the Empire State Building are located.
At Christmas, Fifth Avenue is even more beautiful due to the lighting and Christmas attractions in front of Rockefeller Center, where a gigantic tree is placed to decorate the complex.

Rockefeller Center is an area made up of 19 classic New York buildings, and opposite the main building is the bronze statue of Atlas.

Ice skating rinks are open from October to February in New York. The most popular are at Rockefeller Center and Central Park. During this period, this is a must-see attraction in the city.

Limousines are classic vehicles, full of sophistication and somehow timeless. They can also constantly be seen circling the Big Apple and you can be sure they are almost always transporting a Wall Street executive, a famous celebrity, a resident of the prestigious “Upper East Side”, newlyweds or tourists looking for a different experience. The limousines are spacious, comfortable, full of pampering and clearly make the passenger feel exclusive and special.

You can book a limousine service to pick you up at the airport and take you to the hotel/apartment, as a transfer, or join a group and move around the city at night, going on a different and luxurious tour, passing through the main points of the city.

Did you enjoy our tips on things to do in New York City? Share it with your family and friends.