Have you ever been curious about President Donald Trump’s limousine?

Every step of the president is rigorously planned and taken with the most sophisticated security measures.

Cadillac One is a vehicle like no other: the presidential supercar is a true four-wheeled bunker! Whenever the president moves around, he uses his armored limousine.

Considered one of the safest and most resistant cars ever designed, Donald Trump’s Cadillac One was nicknamed “The Beast”. After all, we are talking about the safety of the highest authority in the United States.

The Cadillac One is almost more resistant than a tank and is equipped with the most advanced technology. This black sedan is part of a fleet of 12 cars that cost 1.5 million dollars each.

Would you like to know more about the Cadillac One? Check out many curiosities below!

With its 6800 kg, the Cadillac One is so large that the doors can’t be opened from the inside.

A small, popular car weighs an average of 1000 kg. That means that this limousine weighs the equivalent of at least six cars.

2- The consumption of gasoline is very high

The presidential supercar can consume up to a liter of fuel at every 400 meters! Have you thought about how much it costs to keep a vehicle like this?

If you drive an average of 10 km a day with your car, you would spend a total of 25 liters per day, which is almost a full tank in 24 hours.

The doors are about 20 cm thick and each one weighs the same as a Boeing 757 back door. That’s exactly what you read, a limo door has almost the same weight as a plane door.

The windows are strictly bullet proof, made of five layers of glass and polycarbonate. No one, except the driver, can lower them (and only 5 cm).

Even if a bullet was fired to the car glass, it wouldn’t reach inside. The car is fully protected against any type of attack.

So, President Donald Trump can feel 100% safe inside this outstanding vehicle. 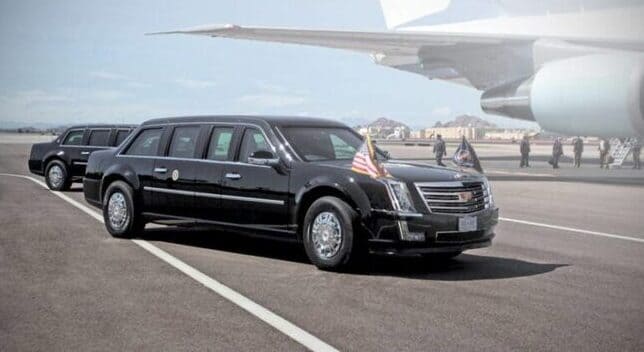 4- Body and chassis are bomb-proof

The entire bodywork of Cadillac One is approximately 13 cm thick and is made of layers of hardened steel, aluminum, titanium and bullet-proof ceramics. The structure is reinforced with steel bars and can even withstand an explosive.

Of course, the car cannot handle very heavy weaponry, but explosives like dynamite will not do much harm to this limousine. It sounds like a movie thing, doesn’t it?

Trump’s car has reinforced anti slip tires. In case the tires are destroyed, The Beast could continue to run on the steel rims.

With that, we simply realize nothing can stop this car. Even if the tires get flat, the vehicle is shot or an explosion happens next to it, the car would continue nearly intact.

All this to ensure the integrity of the President of the United States!

The Cadillac One also has sophisticated infrared cameras and smoke and tear gas launchers. This would be used for any attack attempt made against the president.

The back seat can accommodate up to four passengers. The president’s seat is equipped with a satellite phone and a straight link to the vice president and the Pentagon.

In addition to a firefighting system and oxygen masks, blood bags from the same blood group as the president are also found inside the presidential car in case he needs an emergency transfusion.

The on-board equipment also includes pistols that the driver (trained by the US Secret Service) can use in case of attacks.

Did you like to learn more about how Cadillac One works?

Enjoy sharing these curiosities on your social network and request information about our services by clicking here!