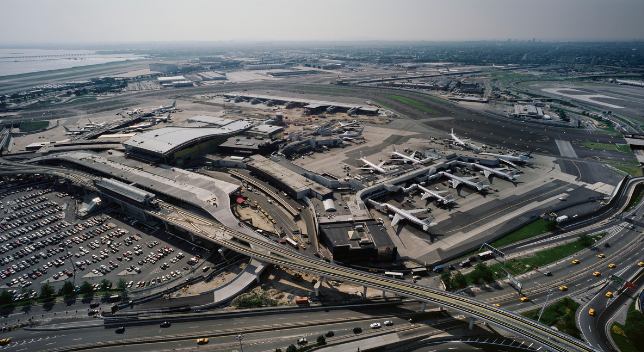 Discover about the 3 international Airports in New York

Discover all about the 3 international airports that exist in New York: JFK, LaGuardia and Newark. It’s important to know a little about each one to decide which one you’re going to fly. See details for each of New York’s airports.

JFK is New York City’s most famous airport and has been in existence since 1948.

It is international and receives flights from all over the world, making it one of the busiest airports worldwide. The area is huge.

The airport serves about 90 airlines, such as American Airlines, LATAM, Delta, Aero Mexico and British Airways.

What to do there: Because it is huge, the airport has dozens of restaurants, cafes and shops (including Duty Free, MAC, Hugo Boss, Michael Kors, Swarovski, Hermès, Bulgari, Dior and M&M’s, among others). In the food options, there are Starbucks, McDonald’s, Dunkin and Shake Shack, among several other options for pizzerias, Asian food, etc.

Location: The airport is located in the Queens area, approximately 18 miles from the center of Manhattan – approximately 40 minutes by car.

Terminals: It has six terminals in operation, numbered 1 to 8 (Terminals 3 and 6 were demolished in 2011 and 2013 after the expansion of Terminal 5, so they are not considered).

Airtrain: To travel between the terminals, or even to reach the parking lot at this airport, visitors use a train called the AirTrain. It’s open 24 hours a day, every day of the week, and it’s free between JFK terminals, and parking lots.

Newark was the first of the three airports on this list to be built, so it is the oldest of them. It’s not as big as JFK, but it still has a sizable footprint.

The airport receives international flights, but focuses more on US domestic demands.

Terminals: The airport has three terminals: A, B and C, where A is domestic, B is half domestic and half international, and C is exclusively used by United Airlines.

AirTrain: This airport also has a train that connects the terminals free of charge. It works every day, 24 hours. You can pick it up from the top floor of each terminal, or from parking lots P1, P2, P3 and P4.

What to do there: The airport has some restaurants, cafes and shops (including Duty Free, MAC and L’Occitane, among others). In the food options, there are Wendy’s, Starbucks, Dunkin and Ben & Jerry’s, among several other options for pizzerias, Asian food, etc.

Location: Newark Liberty Airport is located in the city of Newark, New Jersey. To arrive to the city from the airport with luxury and comfort, we recommend you to book a limo service.

LaGuardia is the closest airport to New York among the three on this list, but also the smallest. It is less than 10 miles away from Times Square.

LaGuardia is mostly used for domestic flights, which may be your case if you are coming from another North American city, by companies such as Delta or American Airlines.

Terminals: the airport has four terminals, A, B, C and D, with the A being the one with Pan Ameican Airways, with international flights. At B you will find American, Air Canada, Southwest and United booths; and on C and D, Delta and other smaller companies. There is a shuttle that connects all the terminals and operates every day, 24 hours a day, with a frequency of 8 to 15 minutes.

What to do there: The airport is quite small, so it doesn’t have as interesting shops as other airports. The food court has cafes, restaurants and diners, including Starbucks, Dunkin, Wendy’s and Shake Shack, among other options.

Leaving the airport: to get from this airport to Manhattan you can book a luxury car service with a chauffeur.

A luxury airport transfer in New York is the best choice for those looking for comfort and safety after a long trip. Mundi’s limo service is personalized and serves any number of passengers and luggage. Our chauffeurs are highly qualified and trained to provide a pleasant and smooth travel experience to our VIP clients.